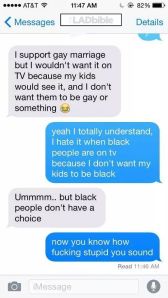 Person One: I support gay marriage but I wouldn’t want it on TV because my kids would see it, and I don’t want them to be gay or something.

Person Two: yeah I totally understand, I hate it when black people are on tv because I don’t want my kids to be black

Person One: Ummm… but black people don’t have a choice

Person Two: now you know how fucking stupid you sound

I saw this and had to share it, because it really did make me laugh. ‘Person Two’ is spot on about how stupid ‘Person One’ sounds.

If my son Max turns around one day and says he’s gay, I have no problem with it and will support him one hundred percent. Just like I support his Godfather Ricky. In fact, it really bothers me when I hear people say things like “God made Adam and Eve, not Adam and Steve“. This may be true, but move along with the times people! I believe in God, but I don’t believe I will be punished for supporting and defending homosexuality.

It is what it is, and there are other things which affect people, such as Domestic Abuse/Violence that needs to be dealt with.

Everyone is entitled to their own opinion – just like I am.

And my opinion is… leave them alone.

8 thoughts on “I Wouldn’t Want It On TV Because…”

Follow Blog of a Mad Black Woman on WordPress.com